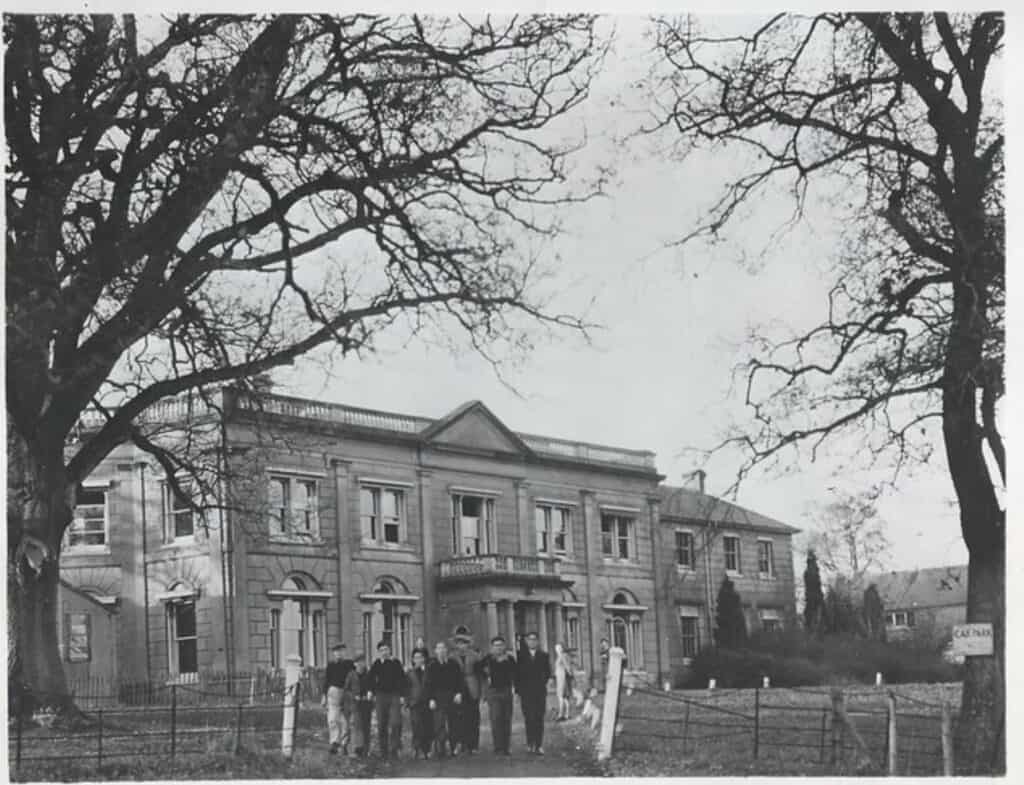 Wintershill Hall was located in the village of Durley not far from Southampton, on the south coast of England.

The house was owned by James Montefiore, a relation of Leonard Montefiore, and was chosen because it was close to Stoney Cross airfield in the New Forest, which had been a base for RAF bombers. It was a large Georgian mansion surrounded by gardens and parkland.

In October 1945, 128 boys and 28 girls arrived in the UK. They had been in displaced person’s camps in the American and British section of occupied Germany and the children’s home in Kloster Indersdorf, near Dachau, in Bavaria. They were taken to a reception centre in Wintershall Hall.

The reception centre was run by Dr Fridolin ‘Ginger’ Friedmann, who had arrived in Britain from Berlin in 1939. In March 1946, the New Yorker published an article on the reception centre. Friedmann told the reporter that the majority of the children wanted to stay as a group and go to Palestine together.

He found the children exceptional linguists and noted that they spoke multiple languages. Alongside English, they were taught Hebrew and what Friedmann called Palistinography. Friedmann spoke the children in German and then repeated what he said in English.

Local boys from Durley played football with them. It was CBF policy that the Boys were seen playing football as it was considered a key sign of Britishness. The Boys had second-hand bicycles and went to the village shop and the local cinema.

They were given pocket money and could spend it on whatever they wished. Friedmann noted that they expected the best of everything and were highly critical if clothes they were given were not of the best quality. Friedmann told the New Yorker that they all smoked, even the youngest children.

Despite their desire to go to Palestine, the minutes of the meeting of the Committee for the Care of the Concentration Camp Children show that the children refused to be moved in a group to Polton House, a training farm where young people wishing to settle in Palestine were taught agriculture. The children said it was too far away.

Dr Fridolin ‘Ginger’ Friedmann ran the hostel. He was a progressive German Jewish educator. Mrs Katz was his secretary.

Member of the religious Zionist organisation Bachad also played an important role among the staff. They included: Shimon Brody, a Mrs Goldstein, Herbert Laster, Sabine Stang and Ruth Richtenberg, who had both been in the Windermere reception centre.

Prior to the boys arrival Shalom Marcovitch, of the Bachad leadership, gave a speech to staff. He had headed up the first Jewish relief team to arrive in the former Bergen-Belsen concentration camp and had spent time with the children.